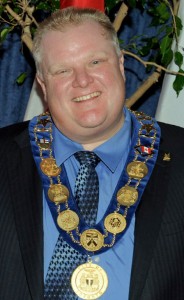 Rob Ford, you will be missed. The former Mayor of Toronto passed away March 22, 2016.  Rob Ford was truly the “people’s mayor”.  He made it clear in practice that he worked for the public.  He was an opponent of excessive red tape and of poor customer service.

Mayor Ford responded quickly to an email from Northland Paving.  We were outlining a number of frustrations and issues of concern regarding inequalities in by-law enforcement within the paving industry of Toronto.  Depending upon where you lived in the City dictated the size of the asphalt driveway you were allowed to have.  By-laws were not being equally enforced and Toronto east taxpayers were being targeted. The same email had been sent to his predecessor Mayor Miller.  Mayor Miller never had the courtesy of issuing a response.

Mayor Ford not only responded but he actually picked up the phone and called.  He then set up a meeting with himself, Northland Paving and the various department heads who would have insight to the many concerns being voiced within the paving industry.

Rob Ford made it perfectly clear that good customer service within the City should be made a priority and said there was no excuse for it not to be.  He expressed his  frustration that the “wheels at City Hall turn slowly” as he put it.  He then  walked us to other offices within Toronto City Hall and introduced us personally to the staff that we needed to arrange further meetings with.

We left the meeting feeling that Rob Ford had logic and common sense.  He was truly representing both his constituents as well as small business.  Yes, he was a colourful character but I believe he truly felt a responsibility to represent the electorate.

I hope other civil servants look at the qualities that made Rob Ford so popular and learn from it.

With over 29 years of experience, we are true industry leaders in residential & commercial asphalt, interlock and concrete services. We are licensed, insured and WSIB registered.

Northland Paving is based in Toronto and proudly serves the GTA area including Toronto, Scarborough, North York, Markham, Thornhill, Pickering, Ajax and Whitby.